This post describes how to conduct posterior predictive checking, and model comparison according to log posterior density. Before describing this, let’s quickly describe a few of the preliminaries.

Let’s say we have a very simple linear model of  with a single covariate . ,  and  are the model’s parameters.
with . This is the same as saying that
This is the model we are saying generates the data. Using a sample of the data , we come up with some estimates for the model parameters using whatever method we feel is appropriate (OLS, method of moments, maximum likelihood, gradient descent, Bayes etc.). Let’s call the resulting parameter estimates ,  and  respectively.

How do we go about assessing out of sample fit in a probabilistic sense? One popular method is to take the (log) likelihood of some observations  that weren’t used to train the model. What does this mean?
Let’s say we have our estimates ,  and  and a new observation . Given the parameters and  we know that the outcomes  should be distributed as
which might look like this: 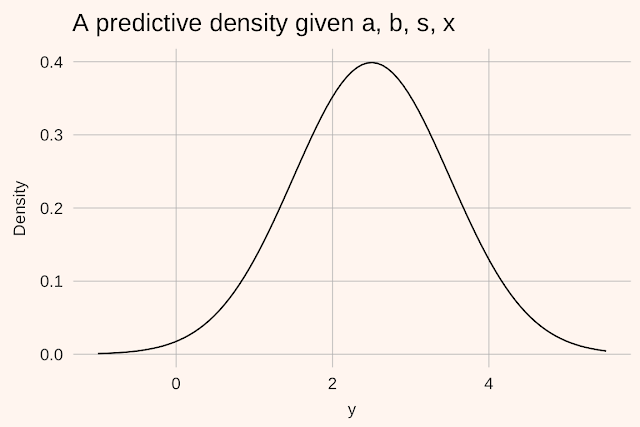 Now we ask: what was the density at the actual outcome ? 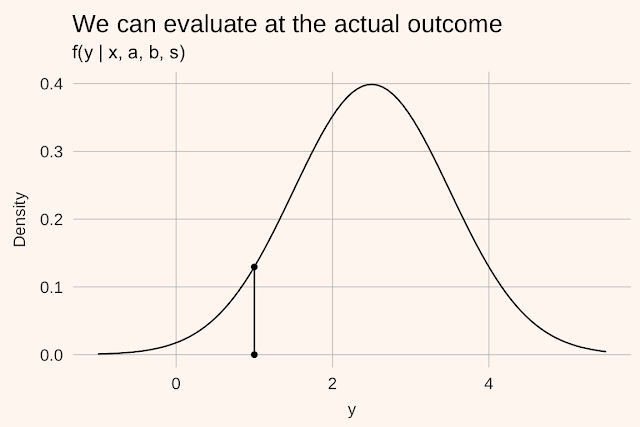 The value of the predictive density at an observed outcome is the out of sample likelihood  of a single datapoint. If we assume (conditional) independence of the draws, the out of sample likelihood of the full out-of-sample draw is the product of all the individual out of sample likelihoods .
You can probably see the problem here—for reasonably large spreads of the data, the value of the predictive density for a datapoint is typically less than 1, and the product of many such datapoints will be an extremely small number. This might give us numerical issues. One way around this is to take the log of the likelihood—the Log Likelihood. Because the log of numbers in (0, 1) are negative numbers large in absolute value, the sum of these numbers will also have a large absolute value, so we’ll not get numerical issues in computation.

So what does the out of sample log likelhood mean?

Log likelihood is a confusing concept to beginners as the values of the numbers aren’t easily interpretable. You might run the analysis and get a number of -3477 and ask “is that good? Bad? What does it mean?” These numbers are more meaningful when conducting model comparison, that is, we get the out of sample log likelihood for two different models. Then we can compare them. The usefulness of this approach is best illustrated with an example.
Imagine that we have an outlier—rather than  as in the image above, it is -10. Under the proposed model, we’re essentially saying that the such an outcome is all but impossible. The probability of observing an observation that low or lower is 3.73^{-36}. The density of such a point would be 4.69^{-35}—a very small number. But its log is large in absolute value: -79.04. Compare that with the log likelihood of the original : -2.04. An outlier penalizes the log likelihood far more than a point at the mode.
This idea helps us do good modeling: we want to give positive weight to outcomes that happen, and no weight to impossible outcomes.

Now say we have a competing model, one with the same parameter estimates but with a Student t-distributed outcome, with a degrees of freedom parameter . Under this model, the log likelihood of  with the same parameter estimates is -8.94—a big difference!.
Formally, so-called likelihood ratio tests specify a limiting distribution of the likelihood of two models (one should be a nested case of another, as in this one where the normal model is the same as the student T model with ) as the number of observations grows. If we have
Where  is the likelihood of the null model evaluated at the maximum likelihood estimates of the parameters, and  is for the alternative model. With as the number of observations grows large,  is distributed  under the null, with the degrees of freedom being the difference in size of the parameter space between null and alternative models.

There are two big issues with the sort of analysis above:
By using Bayesian inference, we are able to avoid these issues in model comparison.

In theory, our posterior  is an abstract distribution; in practice, it’s a matrix of data, where each column corresponds to a parameter, and each row a draw from . For instance, the first five rows of our posterior matrix might look like:
Each of these parameter combinations implies a different predictive distribution. Consequently, they also imply different out-of-sample likelihoods for our out of sample datapoint . This is illustrated for 30 posterior replicates below. 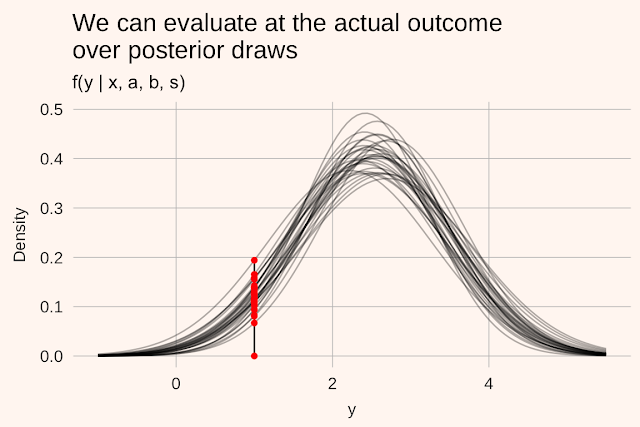 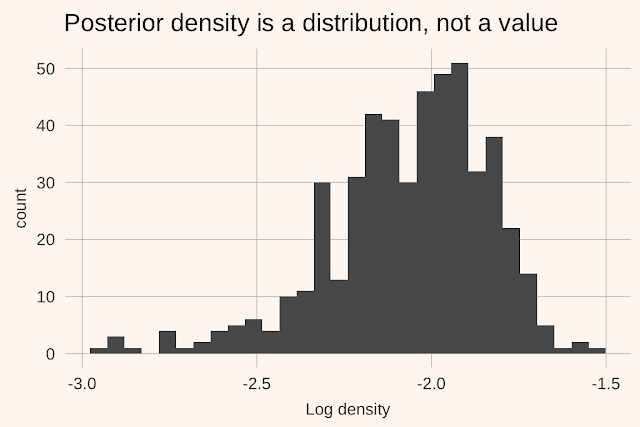 Note that the log posterior density can be evaluated for each datapoint; if we have many data-points for which we want to evaluate the LPD we simply need to evaluate it for each, and sum across all data-points.

In rstanarm
In rstanarm, log posterior density is calculated automatically, whenever a model is called. To extract the matrix of likelihoods, simply use:
In Stan
In Stan the process is slightly more involved, in that nothing is automatic—you need to generate your own log likelihood/LPD numbers. This is done in the generated quantities block. To implement this for the simple model above, we would use the Stan code:
This will record the log posterior density of each observation 1:N across each posterior draw of a, b, sigma. We can then extract the LPD from a fitted stanfit object using:
Note that the Stan implementaton above can be implemented for data that was not used to fit the model, which is why I’ve called the data we’re using to evaluate LPD y_new and x_new.

In the motivation for using log posterior density above, we noted that we want to take account of uncertainty in our parameter estimates in calculating the likelihood.
A similar idea is that when we want to generate predictions, we are not only concerned with the distribution of the data around the expected value (the predictive distribution). We’re interested in how the expected value itself might vary with uncertainty in the parameter estimates. And so for every out-of-sample datapoint, we generate posterior predictions—draws from the predictive distributions across draws of the parameters. In pseudocode:
So in our predictive densities for the point  from above, generating posterior draws would involve drawing a random number  from each of these distributions . 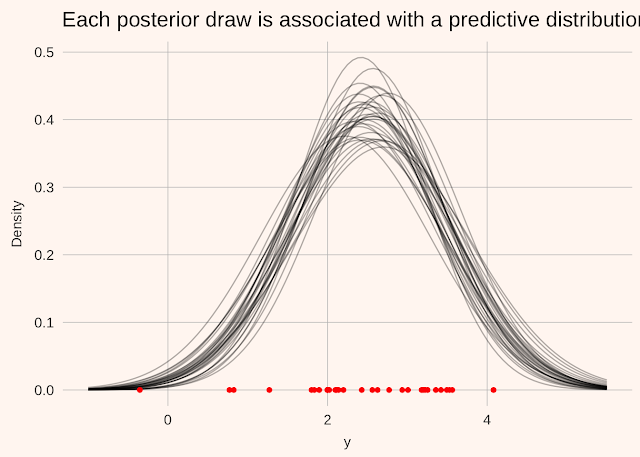 These predictive draws automatically include the uncertainty both of the data distribution, but also of the parameters of that distribution. It is helpful to compare the posterior predictive density (black) for a large number of replicates against the true generative distribution (red): 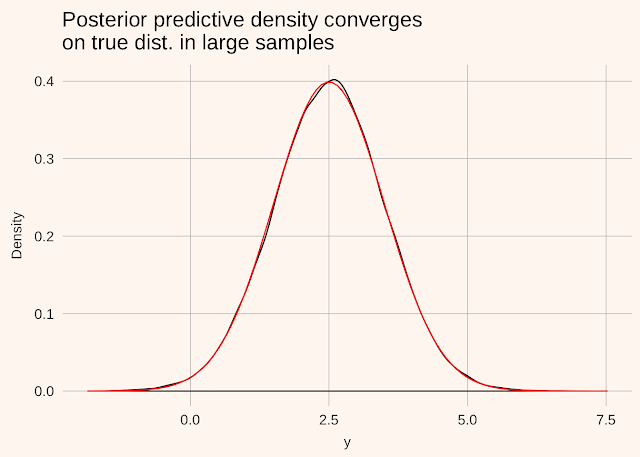 They are the same. Yet for small samples, the uncertainty in the posterior predictive distribution is typically wider: 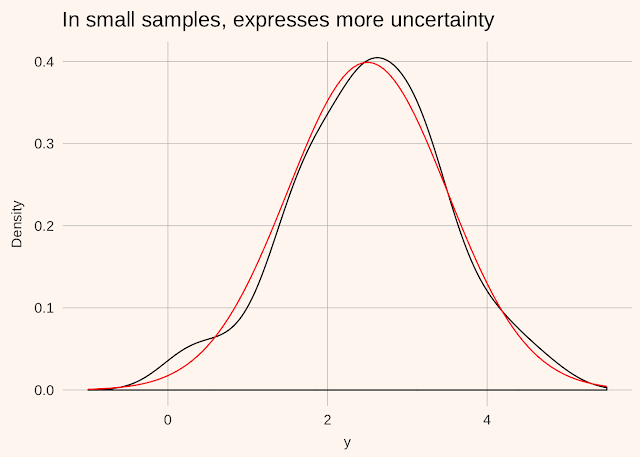 Using log posterior density and posterior predictive draws as a basis for model evaluation and comparison is good practice. When our model puts weight on outcomes that can’t occur, we want to know about it. When the model doesn’t put weight on outcomes that do, we want to know about it. And often just looking at these plots is enough to help you catch issues with your model. Especially for the big and complex models that I work with, getting a handle on how much uncertainty comes from our parameter estimates, and how much is due to the residual, is extremely helpful.
I should note here that this sort of checking helps us think about two important sources of uncertainty: parameter uncertainty and the model residual. But it gives only some guidance on whether the model is the right one. Many models with wildly different implications can provide similar support for the data, and only bootleather and deep thought can help you work out which to use.
Posted by javage at 8:42:00 AM